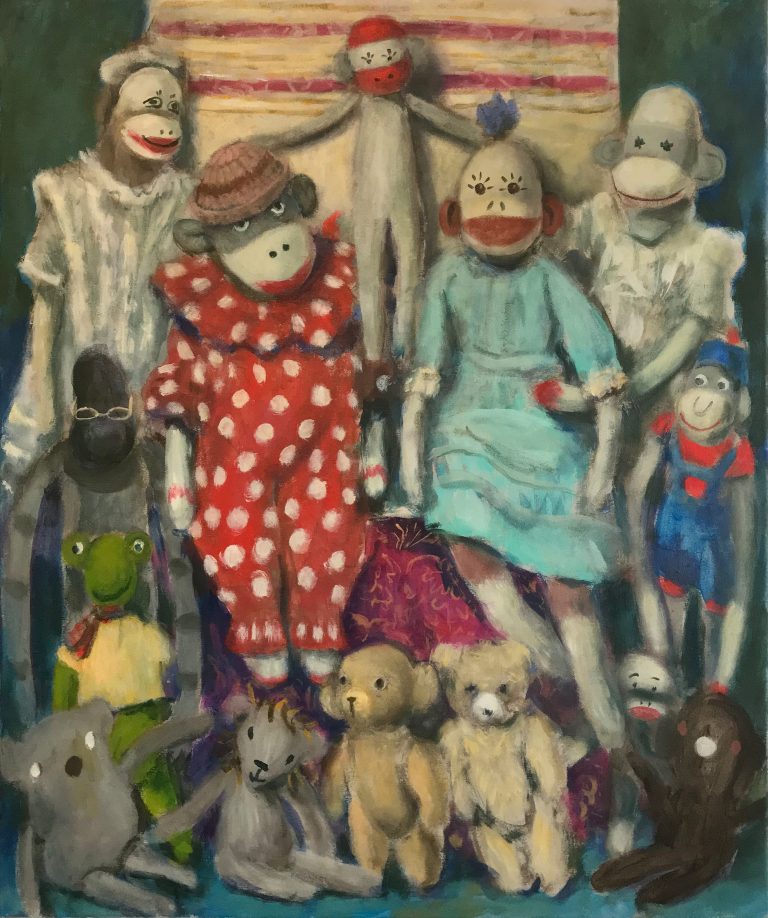 In Sock Monkey Scenarios Vancouver-based artist Thomas Anfield explores in his paintings the labyrinth-like and tangled conditions of being human through the symbol of the beloved Sock Monkey. Inviting us into his carefully choreographed scenes, Anfield’s Sock Monkeys look curiously familiar as we encounter this folk-art puppet in universal human spheres by themselves, or in relationship with each other evoking immediate self-reflection as well as imagined realities. In their theatrical and anthropomorphic quality, each painting shines light on the complexity of being human and the constant shape shifting we experience in the Theatre of Life.

While most of the Sock Monkey paintings are uplifting, witty, and joyful, we also come across some that are grotesque, cynical and dark. As a contemporary figurative painter who is interested in the tradition of painting from life, Anfield paints his Sock Monkey artworks directly from the intricate scenes he sets up for each painting creating unique dioramas for which he uses vintage Sock Monkeys costumed with repurposed vintage doll clothing.

Originally, hand-crafted Sock Monkeys were fashioned out of worn-out work socks. They started to surface in the 1930’s during the Great Depression. However, only once the Nelson Knitting Mills in Rockford, Illinois, U.S., began to include instructions how to make stuffed Sock Monkey toys with their trademarked Red Heel socks in the 1950’s, making them became really popular. This trend continued in the 1960’s and 1970’s reviving its popularity in the new millennium.

Thomas Anfield is a contemporary figure painter and performance artist who has presented work internationally in North America, Europe, Russia, and Africa at venues including, The National Gallery of Senegal, and Salon de Plastica Mexicana. He was co-creator of the company Butoh-A-GO-GO, who were invited by the Moscow Ballet to perform on three different occasions. They were also awarded a full production residency at Banff Centre for Arts and Creativity creating work which then premiered at the Vancouver International Dance Festival. Working in a variety of styles and motifs his years of work both as a figurative painter and performance artist enable him to explore through gesture and deportment issues of gender, body politics and social norms. His paintings have been featured in Modern Painters, Elle, Maclean’s, Vancouver Magazine, and Preview Magazine. Anfield is a Canada Council, Inter-Arts grant recipient and a Dance grant recipient.

My work engages firstly with the concerns and material of painting, colour, form and light. These in themselves have deep ancient resonant transformative powers. The Sock Monkeys enable me to play with both imagination and memory through a symbol that is equally majestic and mischievous, social and natural and most importantly just plain fun.

These scenarios in their theatricality are powerful at revealing and translating a wide range of human psychological truths. Attempting to read the interactions of this odd and strange cast of personalities, we can easily identify and superimpose ourselves onto their simple primate forms. In this act of simple transference, we can feel their many situations and relationships. Yet, despite the ups and downs of our existence, these works are in the end a celebration of life.