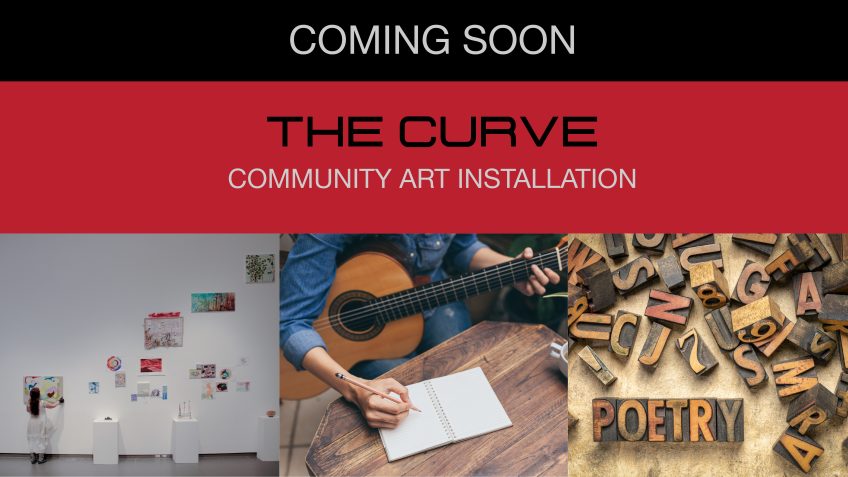 Attention all Peace Country residents!  You can contribute your creative responses to the COVID-19 global health crisis in this special art exhibition, The Curve.

The Curve is a multi-disciplinary community art installation, exhibited through the summer of 2020 at the Art Gallery of Grande Prairie. It will honour those in the Peace Region who passed, who served, and who lived through the largest public health pandemic in generations.

Share your voice and your experience over this unprecedented time in this unique community art exhibition.

There is no deadline for submission and no age restriction.  The Curve will continue to grow and evolve each week as more pieces are contributed to the overall exhibition.

What is community art?

Community art is any art form that focuses on involving community members through the process of art making. Community art often emphasizes the process of art making rather than the artistic result. It is an art form everyone can participate in, which is why often easily accessible mediums like collage and mixed-media are chosen. The strength of community art is that everyone is invited to share their unique voice and creativity to then be experienced by all. Setting aside the notion of appraising art for its commercial value or artistic skill, community art embraces the process of artists connecting with other artists through their art. The purpose is for all individual contributions to culminate in a large artistic composition recognizing that everyone is an artist and an important part of the whole. 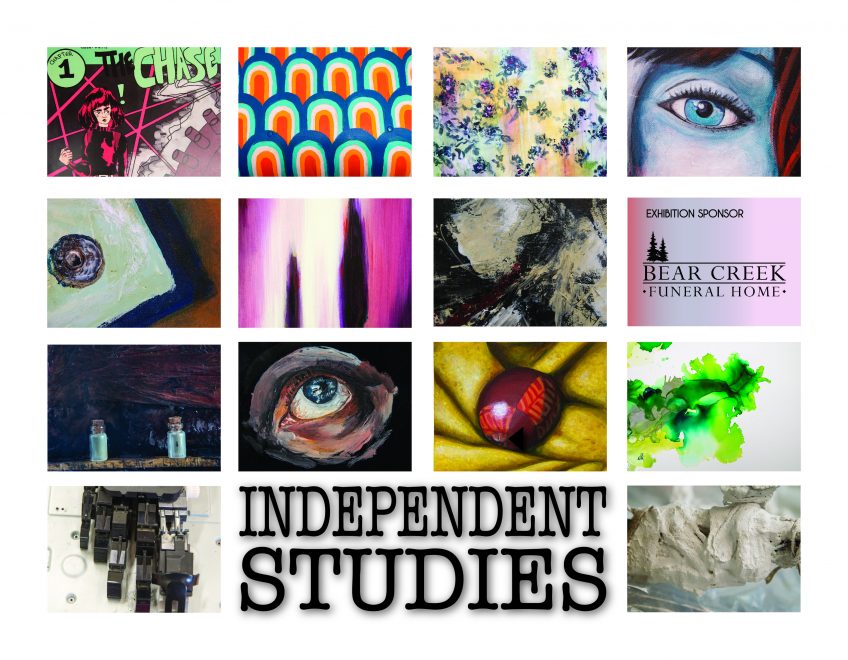 In response to the temporary closure of the exhibition spaces due to the global health pandemic, the Art Gallery of Grande Prairie is pleased to launch its first online exhibition Ten-Four, a group exhibition presenting work created by students in the Special Projects in Art program at Grande Prairie Regional College. Through painting, sculpture, installation, and illustration, each artist presents in extraordinary ways their unique exploration of themes, narrative, and technique. We congratulate the artists for their capacity to explore alternative and unique solutions for the presentation of their work during these challenging times.

Thank you to this exhibition’s sponsors: 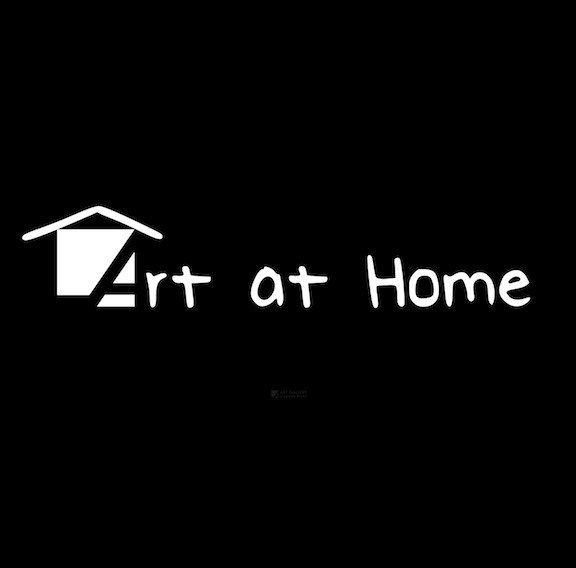 During this challenging time, where many in our community are self isolating, home-stayed, and are taking care of children, it’s important that people can still find beauty, inspiration, challenges and activities for themselves and their loved ones. The Art Gallery of Grande Prairie is launching Art at Home, a series of educational, interactive, and create-at-home videos and activities to combat isolation, a desire for continued learning, and a craving for creative exploration.

Executive Director, Jeff Erbach, explains that the program is a natural extension of the Gallery mandate in these strange times, “We are here to enrich people’s experiences through art, and as we cannot do that in a live setting, we’ll take it to a diversity of other platforms. People can expect to see a wide series of social media posts about art ideas, projects, and more, in the coming weeks and months. We really want it to be meaningful however it can be, whether it’s just a welcome distraction, something inspiring, or assists people who want to maintain positive activities for their children.”

The projects, social media posts, and more, will all be via the Gallery’s Twitter, Facebook and Instagram accounts, and on a dedicated page on our website called, Art at Home. As the program develops, more ideas on delivering activities to the community will be explored.

Click here to visit our webpage and explore Art at Home. 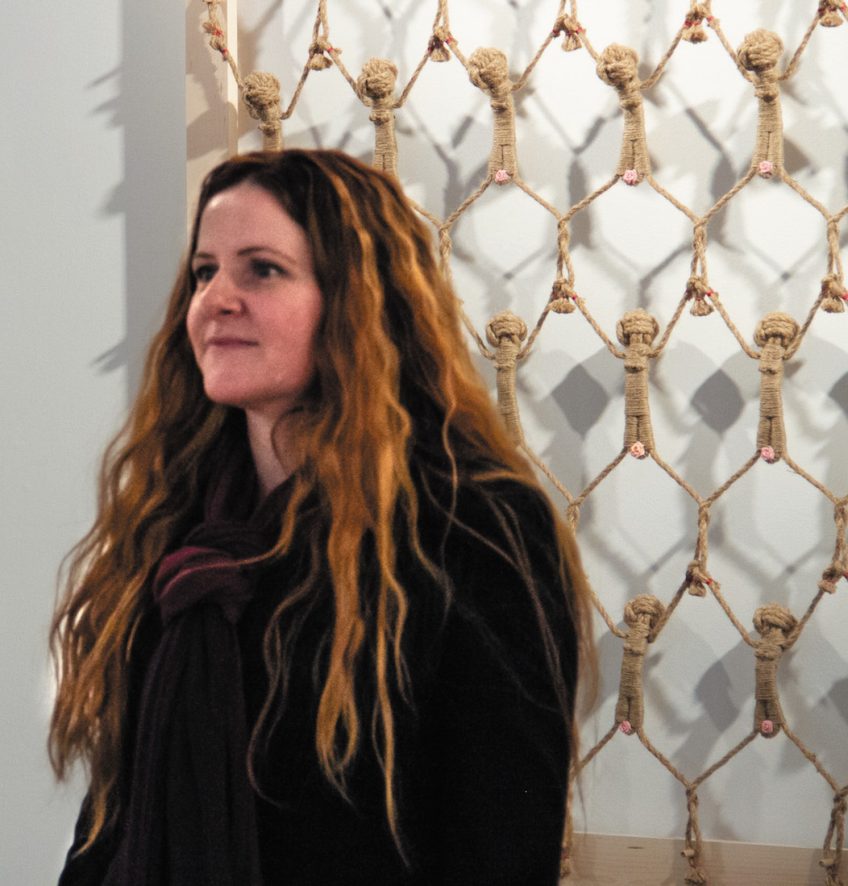 Candace Sanderson’s latest body of work explores the visible and invisible structures that hold women back. For generations women’s rights movements have fought and continue to fight for the fair treatment and civil liberties of all women.

Please join us Thursday, January 30th at 7pm for the Artist Talk. 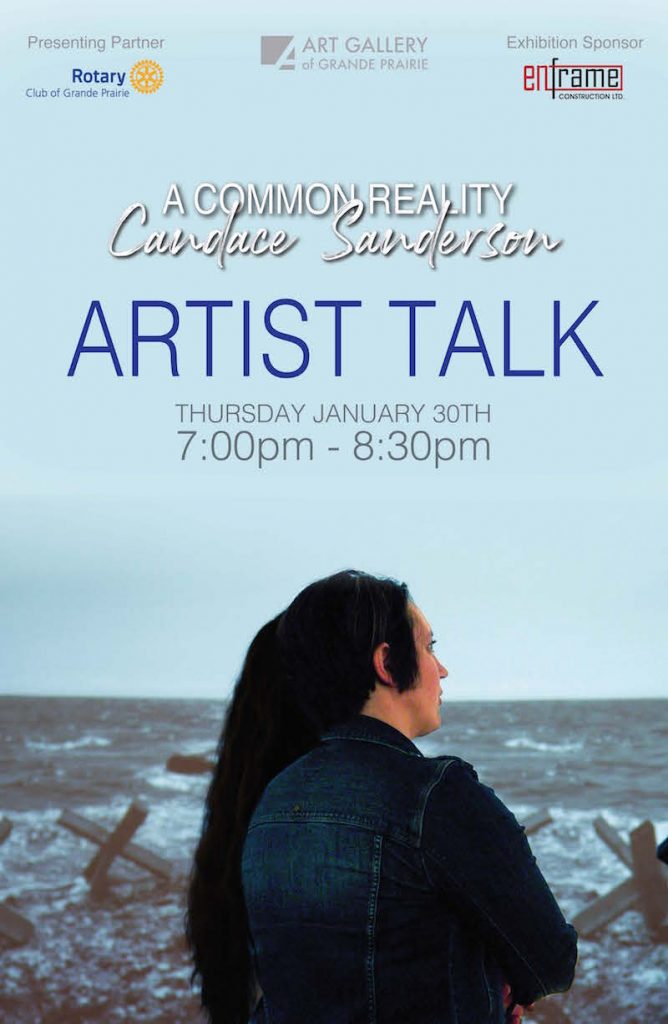 Thank you so much to Candace Sanderson’s Exhibition Sponsors: 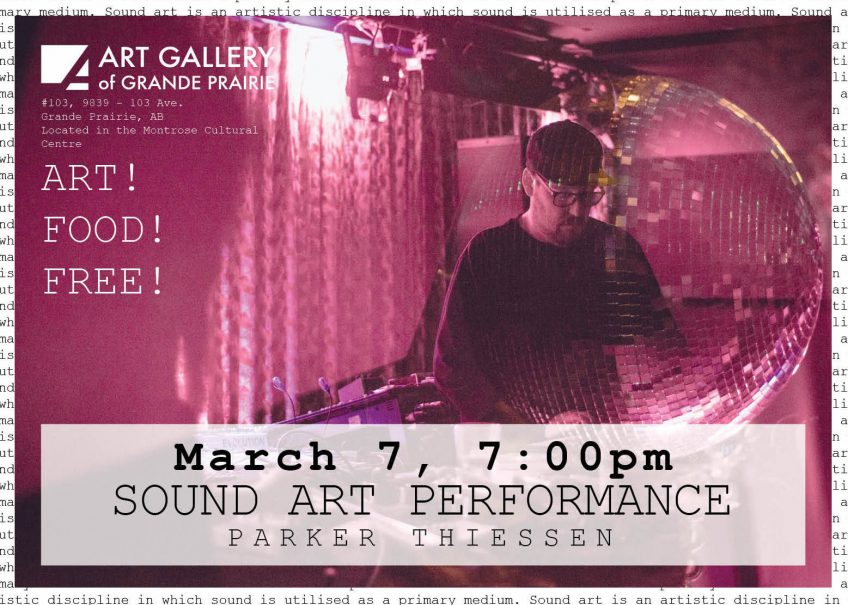 Parker Thiessen is a filmmaker, sound artist/musician and designer originally from Beaverlodge, Alberta, with an interest in collaboration, experimentation and DIY. Through his work, Thiessen has explored and propelled the growth of the experimental music scene in Edmonton, initiating the Ramshackle Day Parade noise collective and label, co-founding Pseudo Laboratories cassette label, and performing in Zebra Pulse, Private Investigators, and solo. His film work includes experimental shorts, live projections, music videos and video glitch experimentation. 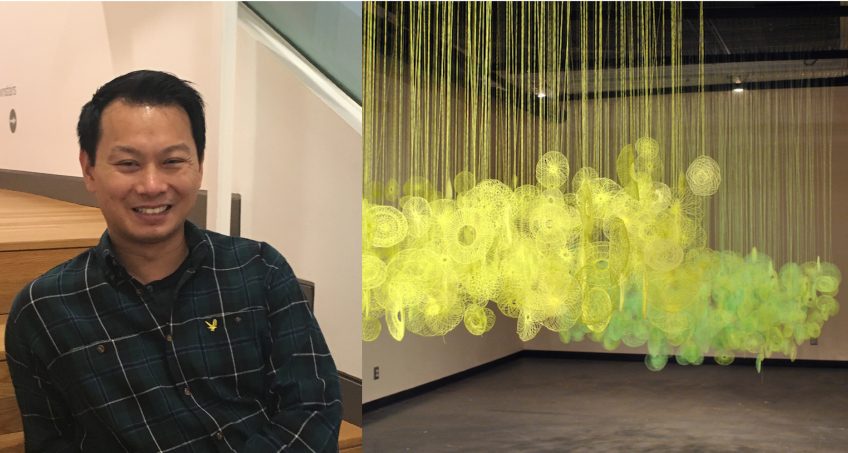 This event is free and open to the public.

Join the Art Gallery of Grande Prairie’s Curator Derrick Chang for a guided tour of the exhibition The
Rich Interior Life, with artwork from artists Amanda McCavour, Eileen Murray and Linda Craddock. Learn more about the exhibition and get to ask the Curator questions.

We’re having a sketch party and you’re invited to draw the artworks in our current exhibitions! The Art Gallery is also featuring art activities in the Carlstrom Family Green Space, our interactive gallery, including a community art project where every visitor may contribute. This event is free and all materials are provided. Everyone welcome! 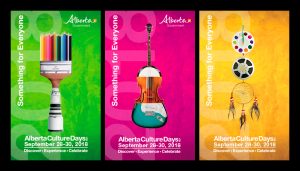 Alberta Culture Days is an opportunity for Albertans to discover, experience and celebrate arts and culture through local events and activities across the province. This three-day event is part of National Culture Days, which includes more than 800 communities from coast to coast, to increase awareness, accessibility, participation and engagement of Canadians in the arts and cultural life of their communities. 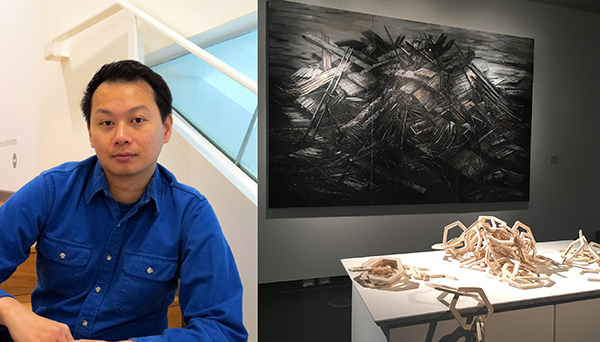 Join the Art Gallery of Grande Prairie’s Curator Derrick Chang for a guided tour of the exhibition Memory Landscape, with artwork from artists Monique Martin, Bettina Matzkuhn, Kelsey Stephenson, and Jeroen Witvliet. Learn more about the exhibition and enjoy a break from the weather in our temperature controlled galleries. 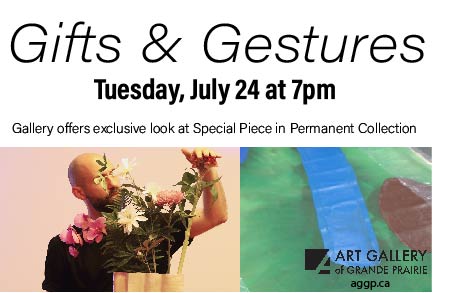 The Art Gallery of Grande Prairie (AGGP) is proud to invite the community to attend Gifts and Gestures, an exclusive look at a project, led by Curator Derrick Chang and Edinburgh based artist, Benny Nemerofsky Ramsay, which physically restores an aging piece while exploring how lost histories can be brought to life.

The painting at the center of the project is titled Consummation (1985), created by celebrated Canadian painter William Perehudoff (1919-2013). In 1999, Perehudoff was made a member of the Order of Canada for his contributions to Canadian painting. The work was donated to the Gallery in 2015 and belonged in the private collection of art critic Karen Wilkin. The artwork was created and presented as a wedding gift to Wilkin in 1985, but has not been seen by the public since that time.

The project, a collaboration between AGGP Curator of Exhibitions and Collections, Derrick Chang and invited artist Benny Nemerofsky Ramsay, will open up a discussion around the painting’s restoration, its history, and the complex notion of the work of art as a gift, not only as a wedding gift, but also as a gift to the Gallery for the enjoyment of future generations.

“For a curator, the pleasure of working with a collection is in being asked to interpret, investigate and preserve the history of works of art,” said Chang.

This special event will be held on Tuesday, July 24 at 7:00 pm at the Art Gallery of Grande Prairie. The project is generously supported by the British Columbia Arts Council. 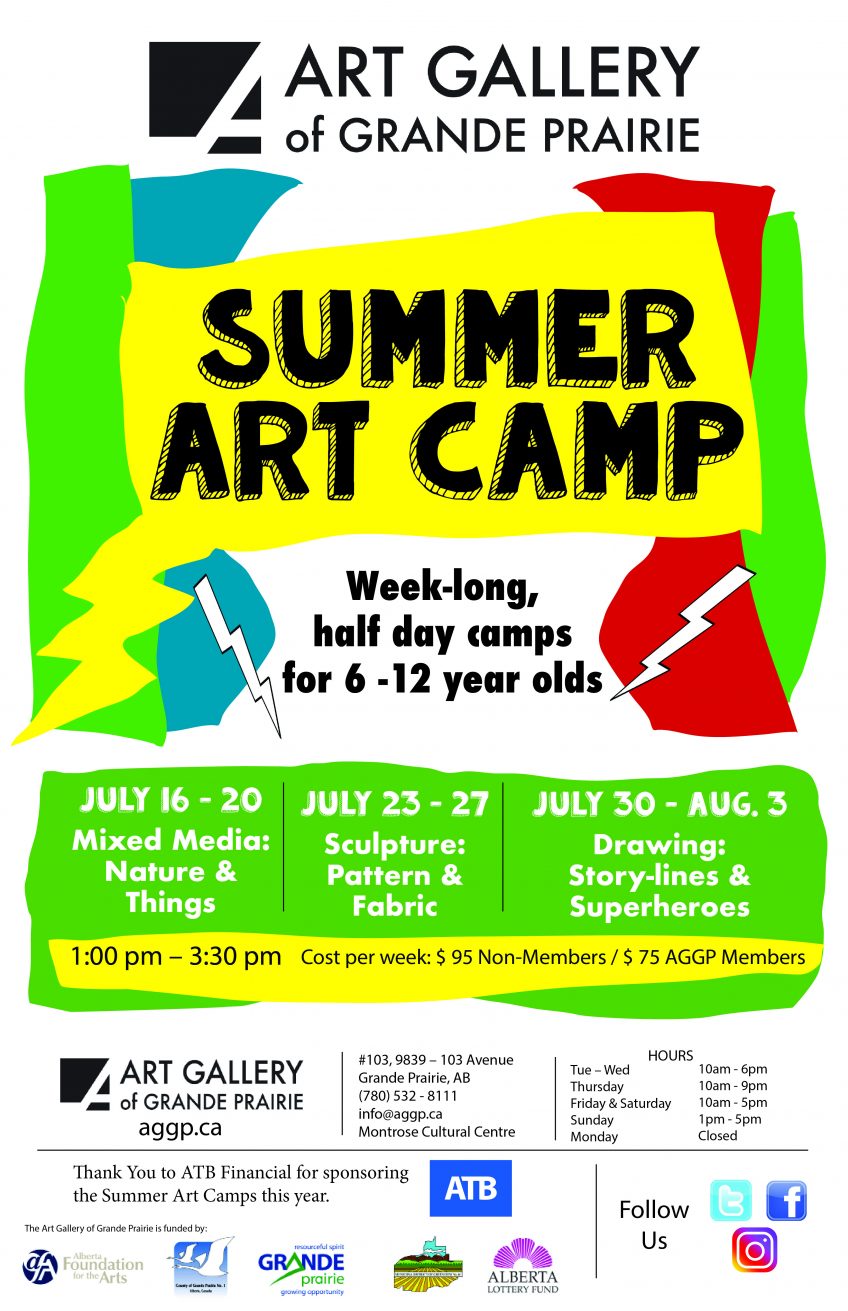 Experience a wide variety of unique and fun art activities this summer at The Art Gallery of Grande Prairie Summer Art Camps! Kids will enjoy creating different masterpieces each day of the week.

Space is limited. Please pack a snack and water bottle or juice.

Based on the exhibition Memory Landscape, students will use a variety of materials to create fun textural, colourful artwork influenced by nature.

Inviting student’s own imagination and inspired by current textile exhibitions, students will learn about various techniques related to fibre arts and creating patterns.

Students will learn different techniques of how to draw people’s portraits and using superheroes to create story lines inspired by the exhibition When Raven Became Spider.

Please Note: The Gallery has temporarily closed its doors.

Starting Tuesday, June 2, 2020, the Gallery is reopening with regular hours.  The community is welcome to bring art submissions to The Curve in person beginning June 2.

Copyright © 2020 Art Gallery of Grande Prairie. All rights reserved. | About This Website